X
Welcome NARPM® members!
Please use your NARPM member ID or email address to login.
Alternatively, you can also your Facebook account to login to the app. 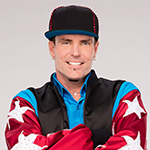 The iconic Robert Van Winkle aka Vanilla Ice exploded on the Rap/Pop music scene in 1990/91 selling 10 million albums in 4 months and hitting number one on the Billboard charts with the number one single “Ice Ice Baby” and number one album positions.   His worldwide album sales are over 25 million and individual songs total over 160 million and are still selling.

Vanilla Ice won 2 MTV Awards, a People’s Choice Award, and was nominated for a Grammy. Vanilla Ice has starred or appeared in the movies Teenage Mutant Ninja Turtles 2, Cool As Ice, The Helix Loaded, The New Guy, The Bros, Big Money Hustlas, That’s My Boy and Ridiculous Six and Sandy with Adam Sandler. Vanilla Ice is starring in Zombie movie slated to film this Spring along with being featured in a video game to be named. He has finished filming a 90-minute documentary to be released this summer and is finalizing a Vanilla Ice movie Biopic deal.

Vanilla Ice performed pantomime Clive on Stage as Captain Hook in Peter Pan in the UK as well as doing a 20-city Dancing On Ice skating tour.  His latest TV appearances include guest spots on ABC – The View, Good Morning America, Good Afternoon America, The Today Show, The Late Night Show, guest spots on The Food Network, ABC Dancing with The Stars, Wheel of Fortune, Family Feud, and Celebrity Jeopardy.

Vanilla Ice has toured consistently throughout his career since 1990 performing all over the world. The last few years tour stops have included the USA, Canada, Mexico, Great Britain, Ireland, Scotland, the Netherlands, Spain, Portugal, Russia, Dubai, Egypt, Turkey, South Africa, Australia and other countries. Since 2016, Vanilla Ice has toured the USA with The I Love The 90’s arena tour with over 200 cities with additional tours in Canada, New Zealand, Australia, United Kingdom.

Rob specializes in doing corporate appearances with keynote speaking, Q&A, short performances along with Meet and Greets as well as video conference appearances with special shout out tailored to the specific needs of the company.